More Than A 100 Years Of Pure Pleasure

Today, just as in the past, Belgian chocolate remains the gourmet standard by which all other chocolate confections are measured. Even the chocolate-savvy Swiss imported the basic recipe from Belgian and French chocolatiers. Crafted in creams, ganaches and pralines, Leonidas’ traditional individual chocolates have been made by chocolate artisans in Belgium for almost 100 years. With chocolate treats this good, you’ll taste why the demand has been so high during the last century. Today, the name Leonidas represents the quintessential Belgian chocolate, not just to the Belgians, but also to chocolate fans worldwide. How did this gourmet powerhouse get started? Like most of our favorite chocolatiers, it was born out of passion for chocolate making. 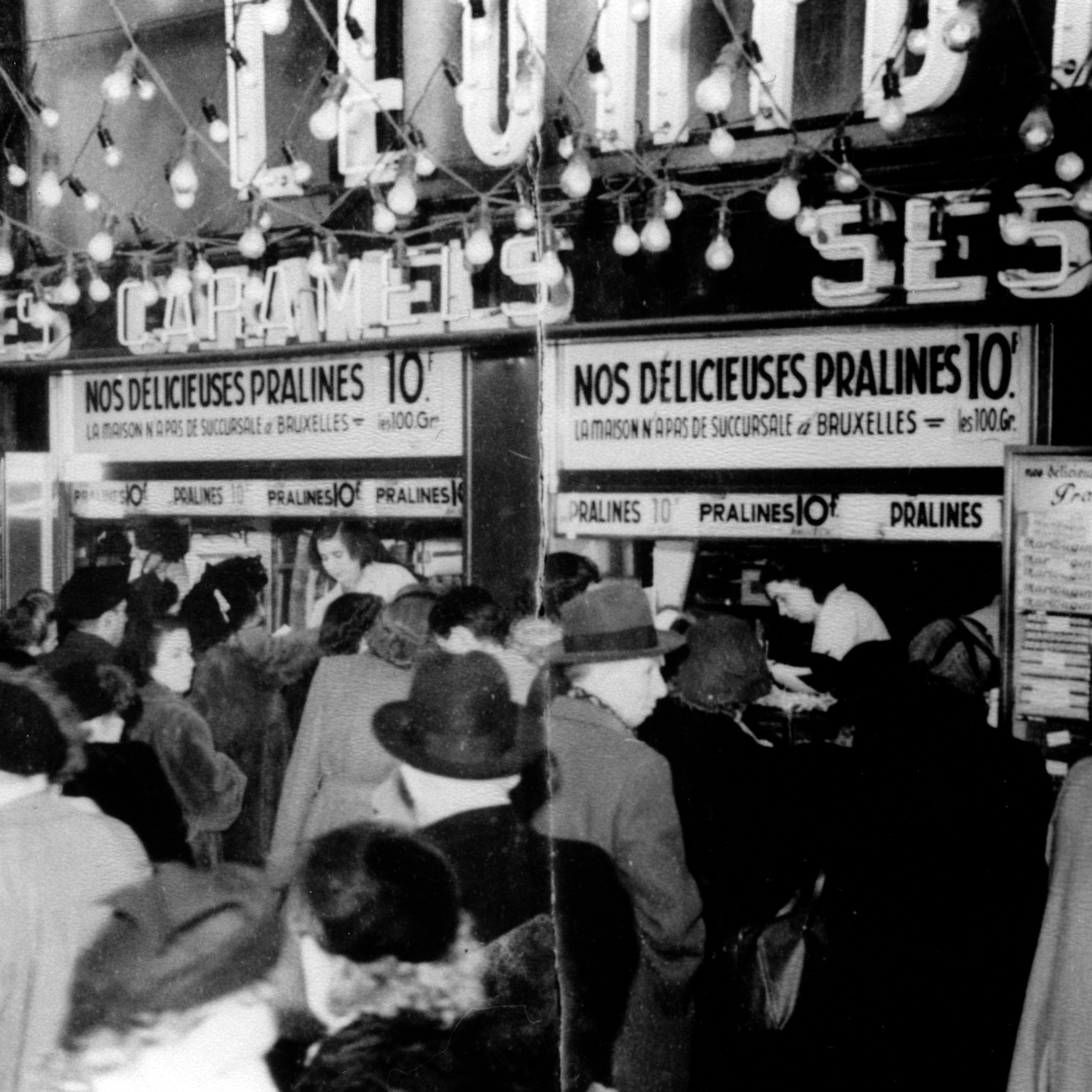 Leonidas’ founder Leonidas George Kestekides was born on 18 July in Anatolia. At 18, this ambitious young Greek emigrates to the U.S. where he learns the confectioner trade. He eventually creates the world-renown brand that bears his first name; this marks the beginning of a life destined for greatness.

Award and a Belgian love affair

As part of the Greek-American delegation, Leonidas presents his confectionery products in the 1910 World Fair in Brussels, which was visited by 13 million people. There, he takes the bronze medal. And his love affair with Belgium begins…literally. He falls in love with Joanna Teerlinck and marries her in 1912. In 1913, they open a tea-room in Ghent. Even though they don’t have any children, Leonidas will never leave Belgium again. And chocolate lovers the world over will be eternally grateful for that!

In 1913, Leonidas exhibits his new creations at the 1913 World Fair in Ghent where he goes on to win a gold medal and earns professional recognition. This marks the beginning of a fascinating adventure that continues to delight taste buds around the world more than 100 years on.

Following political events in Greece; Leonidas’ family joins him in Ghent. Among them is his 19-year-old nephew Basilio, who takes up his uncle’s trade. The two men develop a father-son relationship which proves extremely profitable for business: they create a range of delicious chocolates which gradually wins over more and more customers who can’t seem to resist these tasty treats.

Leonidas opens Pâtisserie Centrale, a tea-room on Rue Paul Delvaux in Brussels. Following in his uncle’s footsteps, Basilio opens his own workshop at 58 Boulevard Anspach. At this time, the praline is a luxury product and business savvy Basilio quickly discovers what delicacies appeal to the rich in Brussels. Leonidas and Basilio come up with a mission: make chocolate affordable for everyone, and the fastest way to achieve this is from producer to consumer.

Determined and hardworking Basilio sells his confectionery and chocolates traversing city streets with a cart. After several warnings by police for street trading, he turns his workshop into a shop. But it was so tiny that there was no door and his laboratory stretched across the window. He quickly uses his workshop window as a counter to serve customers! He inaugurates his first shop window, the revolutionary ‘guillotine-window’, which remains a signature of all his shops for years to come. He now can sell directly to passers-by who can witness the production process on display so there is no loss of time or freshness. And above all, he does so at half the price of his competitors. 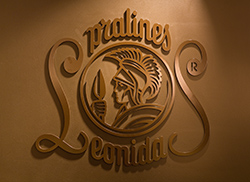 Leonidas is the “King” of the parline

Basilio officially incorporates the Leonidas brand and logo to protect his products. As a symbol, he chooses the image of the warrior Leonidas, king of Sparta. By choosing such a strong figure to represent his brand, Basilio demonstrates his ambition, and more importantly, respect for his uncles and his Greek roots. The logo is represented by a circle with the words “Pralines Leonidas” on top. Leonidas gradually hands over the reins to Basilio who, by this time, has become a master-confectioner in his own right. Leonidas dies in 1948, leaving his business to his nephew.

The workshop at 58 Boulevard Anspach becomes too small and Basilio moves to number 46, a massive space which Leonidas still occupies today. Basilio asks the city for planning permission to transform the shop front window into the brand’s trademark guillotine-window so he can be closer to his customers. During this time, the reputation of Leonidas chocolates grows by leaps and bounds: people appreciate its freshness, quality and delicate taste. Basilio uses only fresh ingredients: fresh milk from the pitcher left at the shop’s doorstep every morning, cream and butter. Since the very beginning, Leonidas creates his chocolates with the highest-quality ingredients without vegetable fat, and only using chocolate with 100% cocoa butter for the chocolate coating and filling. 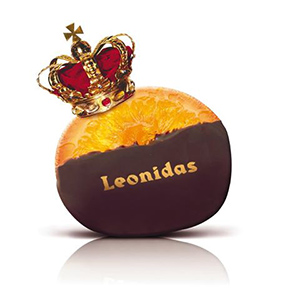 Chic Shop at the Coast

A period of intense growth begins as Basilio opens a “Laboratoroire de Pralines” (Laboratory of Chocolates) at 20 Vieux Marché aux Grains. To please his trendy clientele, he opens a tea-room in Blankenberge for the summer season, which becomes extremely popular with the wealthy bourgeoisie. “Au Lion d’Or”, on the ground floor of one of the most famous hotels that opens up to the sea, becomes the place to be for holidaymakers to delight in delectable chocolate treats.

Leonidas’ success steadily grows and more shops open in Brussels: Boulevard Adolphe Max, Rue des Fripiers and Porte de Namur. The people of Brussels can’t get enough of these small boxes price to boot. Until 1966, you could buy 100 grams of chocolate for 10 Belgian francs (€0.25).

The first shop pop up outside Brussels

The first Leonidas franchised outlet opens in Aalst, Belgium and the first French franchise opens in Lille in 1969. Tempted by the business opportunity, many entrepreneurs come knocking at the door and Leonidas shops increase ten-fold. Belgium had a reputation for producing quality chocolate as chocolatiers from the country grind their cocoa beans extremely finely, giving them a smooth texture. Leonidas captures the market with reasonable prices for a superior quality product. 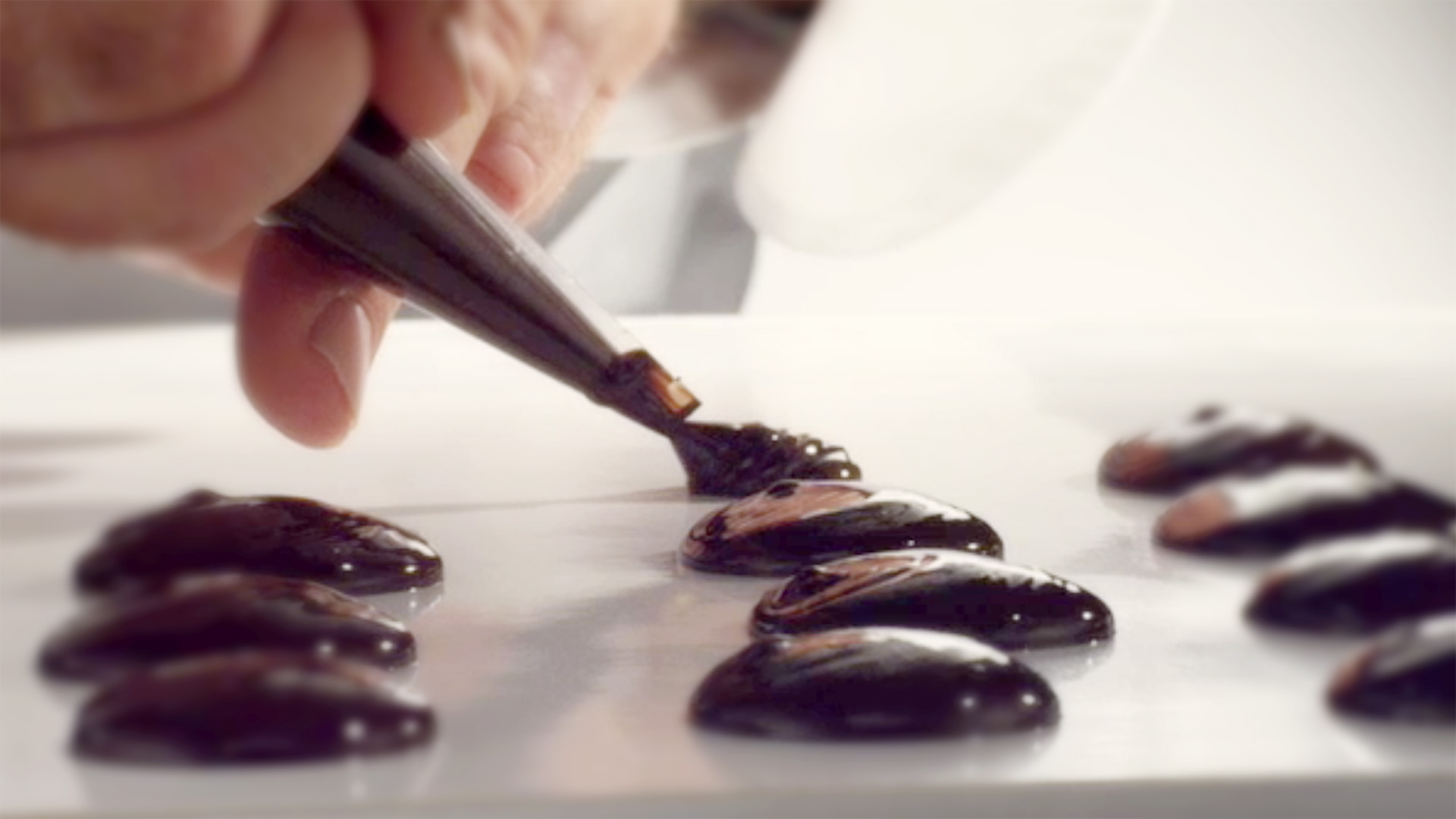 Manon Café, The Cream of the Crop

The success of Leonidas is based on solid values of which the famous Leonidas Manon Café undoubtedly lent credibility to. The base of the Manon consists of butter cream, crisp nougat, hazelnuts, all in a sugar coating. Preferring to work with chocolate, Basilio replaces the sugar coating with white chocolate. Then in 1969, he replaces the nougat with praliné and finally, the nut filling with a whole hazelnut. It becomes an instant bestseller and is still an all-time favourite of the Leonidas range.

On 2 April 1970, Basilio dies and his brothers and sisters become heirs to the Leonidas empire “Confiserie Leonidas SPRL” (Leonidas Confectionery SPRL).  Jean Kesdekoglu-Kestekides leads the company from 1970 to 1985 and the brand eventually goes international selling in Belgium, Luxembourg, Germany, Holland, at Harrods in London and even in Athens. On 29 March 1979, Confiserie Leonidas becomes Leonidas SA, a limited company. The 70s and 80s were the company’s golden years. Attracted by the chocolate’s delicacy, people were desperate to get their hands on them. To increase production, Confiserie Leonidas SA buys the old Crown-Baele factory at 41-43 Graindor Boulevard in Anderlecht which remains the company headquarters. Maria Kesdekoglu-Kestekides joins his father Jean, helping him carry out daily operations. 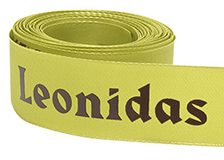 The Price of Success

Maria Kesdekoglu-Kestekides takes over the company when her father dies. She is joined by her brother Dimitrios Kestekoglou and their German cousin Vassiliki Kestekidou. Production increases considerably, and in 1985, Leonidas advertises for the first time with a unique message: Leonidas asks parties interested in opening franchises not to apply because they were not able to follow-up with production! Despite this, Leonidas never increases its prices during this time. Instead, the company chooses to expand rather than to penalise customers with higher prices.

To meet growing consumer demand, Leonidas SA acquires the former building of a cheese dairy company located at Bel de la Rue des Bassins in Anderlecht. Leonidas also expands to the U.S., and in the late ’90s, to Asia where it becomes market leader. The year 1993 saw the opening of the Rue au Beurre shop which holds the distinction of being the largest Leonidasshop in the world with a staff of 20. The shop is open 7/7 from 10h to 23h to satisfy the flood of tourists lured to its stunning shop window. All Leonidas chocolates sold worldwide are manufactured in Belgium. Every morning full pallets leave the country to be enjoyed the world over, always respecting Basilio’s four keywords: freshness, quality, choice and affordability. Only fresh ingredients are used to make the chocolates and the day’s production is sent to its destination by plane at a controlled temperature so they always arrive in perfect

New Shops In The Taste Of Chocolate

Shops receive a facelift and the guillotine-window becomes a thing of the past. All shops adopt a new look that accentuates Leonidas’ innovative and dynamic side, as well as emphasising its freshness, generosity and legacy. Clients are now greeted in a cosy atmosphere with modern look and feel. Only a few guillotine-window shops remain, one of them was due to its tiny size. It is located in the heart of Brussels at Rue des Fripiers, just a few doors down from Basilio’s first guillotine-window shop. 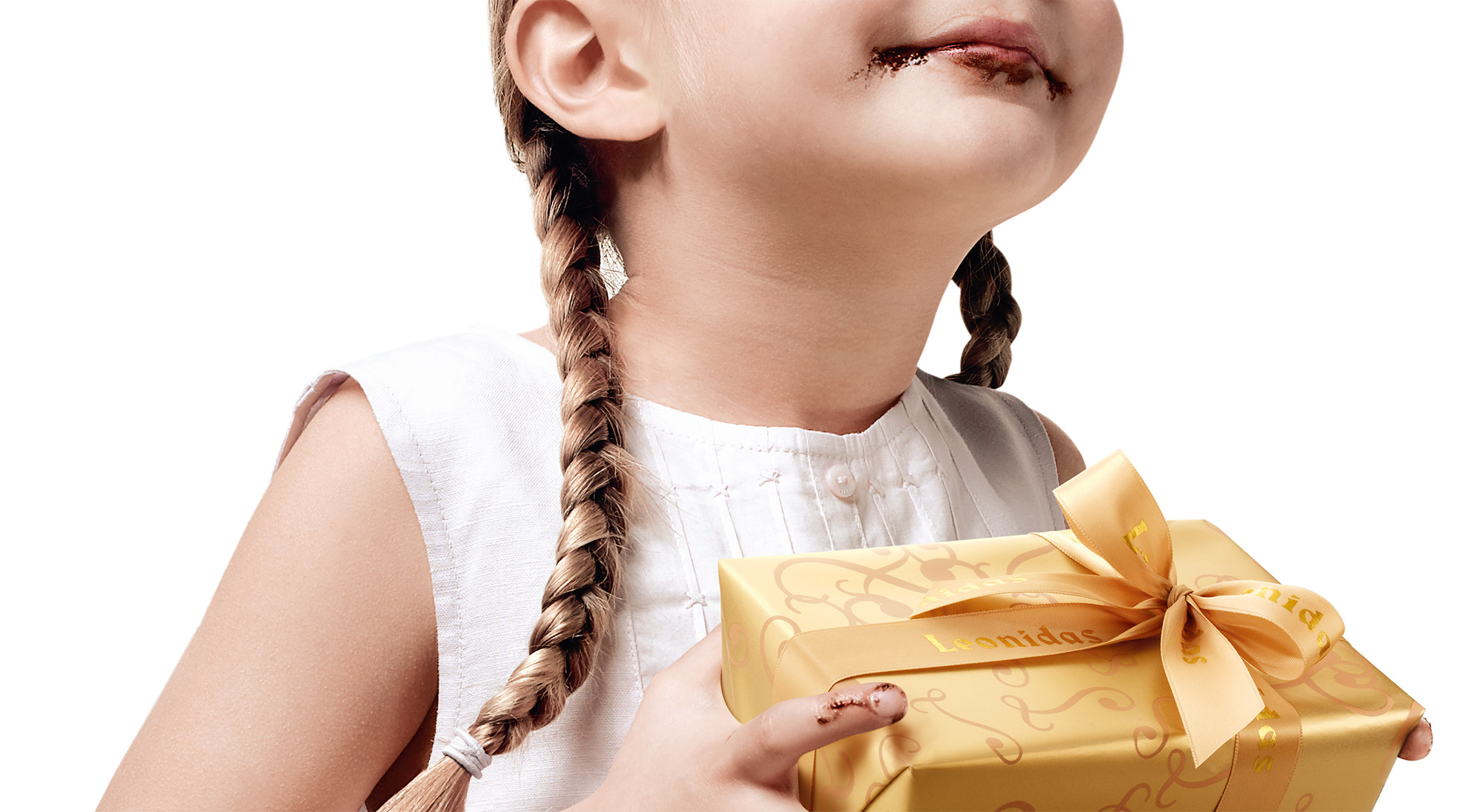 Chocolate and coffee come together in perfect company in “Leonidas Chocolates & Café”. Created in Brussels and Vienna, they begin popping up all over the globe. In this way, people can sample chocolates on site over a cup of coffee, tea, or other Leonidas signature chocolate drinks. Leonidas is present worldwide with nearly 1,250 stores in +/- 50 countries, including 350 shops in Belgium and 340 in France. Hundreds of thousands of connoisseurs devour these tasty delights daily, carrying with them an extraordinary story grounded in a collective passion: to share the pleasure of chocolate.

100 Years of Pure Pleasure and Counting

Leonidas celebrates 100 years of know-how and “savoir vivre”. The founder’s “petit laboratoire de pralines” (small chocolate laboratory) has come a long way without ever losing sight of its spirit and its initial flavours: hazelnuts from Turkey, almonds from Italy, cherries from the Périgord, walnuts from Grenoble and Texas, chocolate made from 100% cocoa butter. In short, ingredients of the highest quality and crafted from a recipe unchanged over time which continues to delight and gratify a loyal clientele. Leonidas is committed to many more years of pure pleasure.